What does the visual field check for? 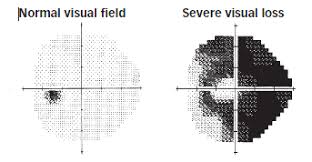 The visual field is the entire area one can see. It includes central and peripheral (side) vision. A visual field test can detect problems with vision in any part of the visual field. Changes in the visual field may be difficult to notice since both eyes are generally used at the same time. One eye can sometimes compensate for some vision loss in the other. A problem may not be detected until each eye is tested separately.

The visual field test provides information that no other test can. It is used to detect many diseases, such as glaucoma or retinitis pigmentosa, which affect the eye, optic nerve, and brain. It can also help diagnose brain tumors, strokes, and other conditions. Visual field testing helps diagnose the disease and can follow the progress of the disease and its

During a visual field test, one eye is temporarily patched while the other eye is being tested. You are asked to look straight ahead at a fixed spot and watch for targets to appear in your field of vision. 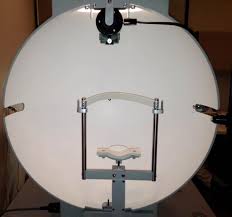 There are two kinds of visual field tests. One method uses moving targets. Targets are moved from outside the visual field (where you can't see them) toward the center of your vision. When you see them, you press a button. The test can be done using a dark screen on a wall (called tangent screen testing) or using a large bowl-shaped instrument (called Goldmann testing).

The other testing method uses small fixed targets that appear briefly as bright or dim lights (called computerized static perimetry). You sit in a chair facing either a bowl-shaped instrument or a computer screen and indicate when you see the targets appear.